So this afternoon, I decided to run an 11 mile hill run from my home through to Chester and back, this is a route I’ve done with some frequency, and contains some substantial inclines as far as length is concerned (no flat land, some inclines last over a mile) as well as comparable declines, making for a rather challenging run in spite of it’s relatively short length. I’ve found myself leaning towards runs of this nature, especially in preparation for the upcoming Turkey Swamp 50k, and following AC Marathon. Knowing that both courses are going to be relatively flat, I think it will be advantageous to challenge myself consistently with hill runs, and try to run them at ~8mins/mile. This is all based on the idea that the body is more concerned with effort/exertion than mileage, which is kind of an arbitrary means of quantifying your run, although, like most runners I do manage a mileage log, complete with shoe details as exemplified at the bottom of my previous posting.

So why would I be talking about today’s run in particular? Well, today’s run had several high/low points. This particular route allows me to observe some really nice agrarian scenery, and takes me straight through a nature preserve, which helps to make me feel more connected with my surroundings, closer to running on a trail than it is to running through the suburbia I usually have to endure when I opt not to travel from my home to run. With today’s extremely foggy weather, and relatively moderate temperature (~72) it was the first run over 10 miles in the past 2 months where I’ve returned home with a substantial amount of water left in my 22oz bottle, the fog, seemed to keep me relatively cool, and consistently wet as evidenced by my soaking wet head of hair by the finish.

With runs of this nature, I’ve also been experimenting with fueling options/quantities, trying to deliberately under-nourish, in an attempt to encourage my body to learn to burn fat instead of/in addition to sugar, as well as regulate my salt output. over the ~90 minute run I ingested only a single ClifShot (excluding the 1 i usually eat before the run) and this was working extremely well for me, without any substantial change in energy levels, UNTIL I reached mile 10, at which point the intermittent heartburn I often experience on runs (usually a result of spicy/acidic food within a few hours of running) became uncomfortable enough for me to slacken to a fartlek(thus ending my ~8minute miles on the hills that I was enjoying so much). I don’t think it was the ClifShot, but rather the copious amounts of coffee I’d been drinking earlier in the day, but was uncomfortable enough for me to be more mindful of what/when I eat in relation to my runs.

In other news, tomorrow is the Western States Endurance Run, and if anyone has been following the internet buzz, especially circling Geoff Roes, it looks like it will be very competitive, and exciting for the ultra-running crowd. Also, my New Balance MR10’s are approaching 300 miles, and feeling better with every step, full review in the near future, as well as initial thoughts concerning my new MT101’s which I hope to give an honest first run this week as soon as a couple of things are fixed on my car, allowing my to drive comfortably to worthy trails. Oh, several other lifestyle “experiments” are in the making, updates regarding such will be coming shortly (once I solidify guidelines for such things!)

Like Loading...
So I’ve decided to publicly post my thoughts on the running shoes I currently own, as well as those that I acquire over time. After hiking through the Catskills last week, I found that my presumptions about my present boot situation were correct. As a result of my pursuit of minimalist running shoes, sandals, barefoot running, and otherwise shunning raised heels, arch support, and the associated loss of ground feel that popular shoes/boots provide, I’ve found that my boots are indeed too supportive. Yes, too supportive, after hundreds upon hundreds of miles, I can no longer tolerate the suffocation of my foot, loss of ground feel, and handcuffing of ankle flexibility. This, of course made me reconsider my hiking footwear, and I’ve decided, against the recommendation of most hiking footwear specialists, to forgo boots, and instead wear a pear of lightweight/minimalist trail running shoes for upcoming backpacking adventures.

This decision is mostly based on the requirement of my boots for me to land on my heel, especially during descents, and while in the Catskills I found that my knees were more sore than they would be after a 15plus mile hill run, in spite of the fact that I had only hiked less than 10. While descending I found that landing on the forefoot alleviated the knee discomfort, but as a result of the stabilizing effect of the boot with regard to my ankle, it was more difficult to be as nimble as I would be in a trail runner. So, after much thought, I decided to purchase a pair of New Balance MT 101’s

These, of course are the shoes designed in part with/for ultra-runner Anton Krupicka. They have a 10mm drop, which I’m not too excited about, but will refrain from judgement on until they have substantial enough mileage. They have an aggressive tread shown here: 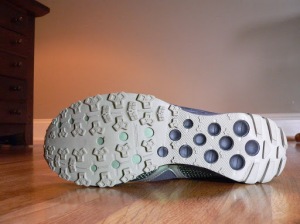 which I’m looking forward to testing on a variety of terrain/trail conditions.The MT101 also has a rock stop, which I’m hoping will be advantageous during some upcoming treks/runs through the White Mountains, as well as the Rangeley Lakes region in Maine, not to mention my regular runs through NJ, where according to most AT through hikers, is where boots come to die.

Initially, the heel-forefoot drop of 10mm is slightly disconcerting, but on a short jog, seems not to interfere with my form, and while the shoes is heavier than my MT10’s, (7.1 oz for the MT10, 7.8 oz for the MT101)which, so far I love (real review on those to come shortly) the addition of the rock plate, and slightly more reinforced upper have me excited, plus, who doesn’t need another pair of trail running shoes!?

For the record, I’ve decided that while I intend to review shoes on this blog, no shoe that I intend to use for substantial running/hiking will be reviewed with fewer than 100 miles on it, this should allow me to become rather comfortable with the shoe, and accurately note it’s pro’s/con’s. But in this particular case, I’m just too excited about new trail runners to not talk about it! (something tells me that this is a likely trend)

So I suppose the first thing to do with one of these is to provide some sort of mission statement, a proclamation regarding the intended subject matter of this here blog, unfortunately, I have a feeling that these things will eventually take on a life of their own, and despite my best intentions to keep within a single vein, I will likely be unable to write solely about one part of my life. This blog will, however, contain a substantial amount of material considering my recent running, training for ultra-marathons, barefoot/minimalist shoe philosophy, including reviews of shoes/clothing as I acquire and test out new things. I will also be cataloging my backpacking adventures, and interjecting with commentary on life as a music student. Expect pictures, ruminations, reviews, and maybe even a recipe or two!