Like Loading...
Monday March 25 AM, 8 Miles 1:00 According to weather.com it was going to rain/snow this day, so I planned to suffer the treadmill with my buddy Pete (one of the few upsides of the dreadmill is that you can do so alongside friends who wouldn’t otherwise keep up). Instead, it was decent out (at least in the AM) so we were inside for nothing. Anyhow, I still think there’s validity in an even-paced effort on the suffer-machine.
PM 4 Miles, :30 Now it starts to precipitate… finishing the day off on the ‘mill again followed by some leg work with the weights.

Tues March 26 AM, 10 Miles 1:35 2500′ Ran the Wildcat Ridge Romp course with Dave. Surprisingly this isn’t too far off of the single-loop CR… and also near Dave’s PB on the course
PM 3 Miles :20 Evening shakeout, not too hard, just trying to keep the blood moving through the legs.

Wed March 27, 6 Miles 39:30 580′ End of day run.. Had to go into the city in the morning which functionally eliminated the chance for a morning run.

Thurs March 28, AM, 7 Miles 45:15 940′ Pre-class morning run through the local neighborhood roads. Didn’t expect to run particularly quickly, nor did I feel like I was exerting myself at all throughout the run. Overall pretty pleased with the outing.
PM 8 Miles 1:02 1020′ Ran into Dave as I was pulling into the lot (early) so we ran a pretty snappy 3 mile loop with a couple of intervals followed by the usual casual broken-shin-loop.

Fri March 29, 12 Miles 1:42 3000′ Allamuchy. First time back since the hash (I think) feeling remarkably solid throughout, although running conservatively. last 5k was at sub 7 pace without really trying to do so, so I guess hitting flats/roads quicker is starting to pay off as far as setting an automated easy-terrain pace. Also, took a gnarly fall around 8 miles in… more trail rash…

Sat March 30, 18 Miles 2:42 5000′ Originally meant to do more miles to make it a “real” long run, but as the mileage piled on, it became increasingly apparent that it was not the best day to be putting major stress on my legs. Fundamentally I knew that I was going to have to put on some mileage on Sunday to really reap the benefits of a higher mileage week, and if I ran much more I was unlikely to force myself out the next day. As important as I think long runs are… I think the day after, starting on shit-legs and running 10 or so miles in general misery is more important (mentally and physically)
PM 1 Mile 9:00 Easy-peasy shakeout

Totals: 89 Miles, 16,020′
Pretty happy with this week overall, it seems that I’m hitting some reasonably substantial vert while still maintaining some quickness under my feet. I still need some bigger miles, as well as some genuine long runs going into race season, but in spite of my comparatively low mileage on the year I’m feeling reasonably fit and continuing to surprise myself with the strength in my legs during the most tired moments.

Like Loading...
Spending some time in the Pine Tree State running the local mountains… I’d forgotten how much fun, and how challenging running directly up a big mountain can be. For the sake of brevity, and my (still) lack of trust in my right leg, I’ve been choosing the most direct lines to the summit, to reduce the amount of actual mileage, while still getting myself above treeline, which has amounted to pretty short trips (~45 mins) but with maximal effort throughout the entirety of the trip.

Only a few short months ago, I would be frustrated going for a run where the overwhelming majority of my time would be spent hiking. In fact, it seems that hiking, despite its inherent necessity in mountain running, (especially at the ultra-distance) hiking is often under-appreciated. The reality of the situation is that these more direct lines, while shorter in mileage, more than make up for their brevity by requiring a backbreaking effort throughout. Nothing can compare to an extended incline session with your nose to the ground, hands on your knees, and breathing heavily with every planting of the foot. Sure, it’s not a run, but it’s still the most efficient way to move quickly through the mountains.

This past weeks worth of serious vertical abuse has helped me to successfully regain a lot of the lost trust in my right leg. In spite of the brevity of my sessions (the longest being ~1h46m) I managed to really attack some vertical gains and losses, and contrary to my expectations, my knee/ITB feel great, even after bombing down scree, leaping over boulders, and generally being reckless. Perhaps more importantly to me is the fact that I was able to consistently get above treeline almost every day this past week (I did take a day off for prudence, and one for travel). and if the sunburn on my shoulders is any indication of summertime mountain-efforts, I’m doing pretty well. 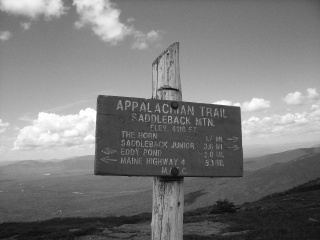 Like Loading...
This is of course, inherently self-serving, (but isn’t the point of a blog self-serving anyhow?), but Dave has just posted the video from the NF 50 over at the Highlands Hashers blog.

Like Loading...
My stomach virus ended up keeping me off of my feet as far as running is concerned for a whopping 10 days consecutively, excepting a hash, which sort of counts as running, but the exertion seemed to retard my recovery another 24-48 hours, but, c’est la vie. Since then, I’ve been trying to get myself back on my feet, and feel like a runner again. With the combination of hurting my foot on a recovery run several weeks ago, a solid  head cold, and the most recent illness, November has been the lowest mileage month of the year. The rest hasn’t gone completely to waste, and without any races looming in the immediate future, I don’t feel too guilty about it, but it’s nice to be starting to feel like a proper runner again, as opposed to the pseudo-recreationalist/couch potato that my logbook demonstrates for November.

As I’ve returned to the roads/trails I’ve noticed that my fitness has certainly diminished some, but in ways I didn’t quite expect. My endurance is understandably down, but more noticeable, is my erratic pace-rhythm. I’ve always been subject to positive splits, sometimes dramatic, sometimes understandably subtle, but in the recent days, I’ve found that positive splits are running my life… Part of this is likely derived from my abundant excitement to be running again, resulting in my heading from the car at ~7min pace on technical trails, which in my current state (or even when I’m very fit) is typically a ticking time bomb for walking, or at the very least, slowing down dramatically. Strange, however, is the fact that my body seems to be adjusting to this haste out of the gate, allowing me to crush former best times on many of my regular courses through the first 7 or so miles, which is when things seem to begin to fall apart, yielding mediocre overall times. So with some luck, I’ll be able to continue to push the boundaries, and eventually start knocking some serious time off of my regular runs, especially once i re-acquaint myself with the necessary pacing-distance ratios.

As far as the foot is concerned, it’s still not quite 100%, but I think I’ve figured out what’s exacerbating the discomfort, and how to change things so that it can both heal, and keep me running. I’ve returned to running roads, not exclusively, but substantially more than trails, which seemed to be aggravating my foot the most, and noticed that my cadence/balance was different on the road than it was on the trails. Part of this is the obvious necessity of negotiating roots/rocks/other technical aspects, but I think to an extent I had allowed myself to become formally lazy, since I wear a more built up shoe on the trail than I do on the road (more on this later). My trail shoes are still what most people would consider a “minimalist” shoe, but they’re still much more built up than my typical road shoe. Now I’m not an advocate of overly minimal trail shoes, as they simply don’t offer enough protection for the speed/distance/technicality of my regular runs, but the more protection, the more it hides form issues, this of course, is the trade-off. So running some in my road shoes has discouraged over-striding, as well as increased my turnover rate, which yields less impact on my sore foot, in addition, it’s facilitated a more mid-foot oriented strike, which i think is better balanced than an pure forefoot, thus engaging my calf more, and the foot a little bit less. So right now, the plan is to run a lot on roads to regain some fitness, and hill climbing strength, with the hope that when I return to mostly trail running, I’ll have the stamina to maintain better form throughout the run, and subsequently subject myself to fewer rough landings.