So by this point I’ve reduced my overall trip length from ~80 miles to a more manageable ~52 miles, however, since I’ve now arranged for a shuttle, I have a very precise time deadline, which if I intend on getting out of the woods, I absolutely must make, so time goes from being something that simply passes, to something that matters tremendously.

I hiked out of the Carlo Col shelter with Kites and Cakes at the tremendously early time of 6am, bent on making it at least to Speck Pond, a ~10 mile day involving both the Mahoosuc Notch, and the Mahoosuc Arm.

Somewhere about a half of a mile in, I chose to leave my new friends Kites and Cakes behind, feeling rather strong in the leg, and having many miles to go that day, it seemed like a good decision, I did, however, make sure to give them my contact information, and promise them a ride and a shower when they got to Rangeley Maine, which they did capitalize on! Moving through the mountains as the sun gradually rises is really something i recommend for everyone, there’s some sort of purity in the early morning that’s really incomparable to any other part of the day, and to summit in the early AM (before 9?) is something that it seems only the backpacking community, with a handful of trail-runners and really ambitious day hikers get to enjoy, if you haven’t been on a mountain as the early morning clouds are blowing off, you’re missing out! 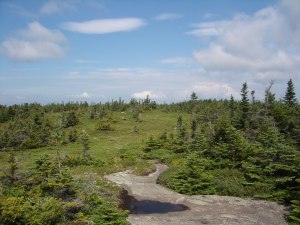 Not to mention the complete and total solitude that you can enjoy in these early mornings, of course being miles away from any roads doesn’t hurt either… Of course it had rained the night prior, which made for super-slick trails, leading to me falling a record number of times in an hour (something like 7) I don’t think I’ve hit the dirt that much since i was about 3 years old… but, c’est la vie, if you don’t fall a few times, you’re not trying hard enough.

So I made it to, and through the Mahoosuc Notch, which essentially turned out to be ~1 mile of bouldering, with full pack, and having to stow my trekking poles (which I ended up bending! lucky Leki has a lifetime guarantee on aluminum poles) only to be followed by a wicked ascent up the Mahoosuc Arm, still slick from the night before, but after that, you get to see this:

Which is pretty cool… and worth the effort.