Wed April 10, AM 5 Miles 1480′ 39:30 Power Line trails
PM 5 Miles, :40 Dreadmill session. I’m pretty sure it was cold and raining, or something to that effect, otherwise I can’t see why I would have hit the suffer-machine (usually my log-book notes if I did an incline workout on the ‘mill)

Fri April 12, 1 Mile :08 Felt incredibly low all day, like couldn’t really bring myself to do much other than watch reruns on netflix and generally be a sloth. My legs felt great when I finally did go out and run, but my head just simply wasn’t willing to subject itself to a respectable distance.

Sat April 13, 25ish Miles, 4:30 7000′ Delaware Water Gap with Jayson. TH>Tammany>Sunfish Pond> Catfish Fire Tower> Dunfield Creek Parking lot via AT. Brisk morning, but relatively clear, Jayson and I decided to try to hit some of the cooler parts of the Water Gap park as well as the AT. I felt really good the whole run (like dynamite according to Jayson) and really didn’t notice even the slightest bit of fatigue until the final few miles, which was mostly because I’d stopped eating hours before.

Thurs April 18, AM 5 Miles, 1480′ :41 Feeling sluggish, and not quite there mentally
PM, 10.5 Miles   Ran with Angelo for a bit, rather quickly (Angelo runs from the same start point as the Highlands Hashers, but a bit earlier, so we’ve been crossing paths for the past month or so) then finished up with the broken shin loop. Felt incredibly shitty for 3ish miles in the final 5, most likely from low blood sugar and a bit of dehydration, nothing I couldn’t have fixed with a GU and something to drink.

Sat April 20, 1 Mile, :09 Played my final concert with the Rutgers Symphony Orchestra the night before, so the combination of lack of sleep, and massive hangover really put a damper on any plans I may have had… also, last drops of beer before the race, Got to clean up for a couple of weeks to make sure that I’m in top shape.

Sun April 21, 15 Miles, 4440′ 2:04 Power Lines in triplicate. Overall things felt really strong, but I was pressed for time between teachings, and had a small niggle in my hip/knee on my right leg, so it seemed like a prudent plan to cut things off.

Overall I’m feeling really fit right now, and comparing my mileage/times to last year, it looks like I’m right. I’ll probably end up ~150 miles shy of last years total before the NF Bear Mountain race, but my last six weeks have been much higher in volume, as well as a LOT more consistent than they were last year. Hopefully my concentration on technical trail and vertical gain/loss will end up paying off in the long run. As for what’s coming up… I’m hoping to train hard through the 28th or so, and then cut a really hard taper going into the race. Judging by the way that my legs have been recovering, I think I can get away with a relatively short taper (as opposed to the 2 week taper I did last year) plus, the additional mileage and time on trail is helping to really boost my confidence going into the race. 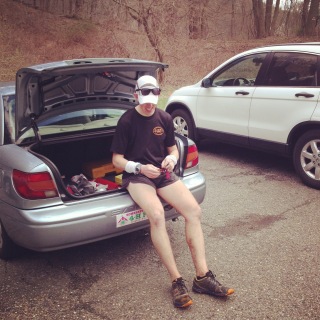